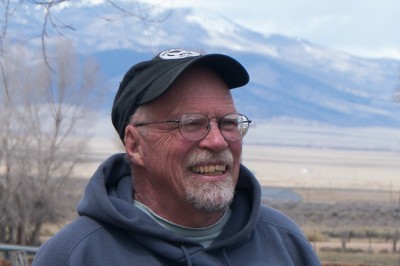 Orient Land Trust (OLT) is pleased to announce that long-time Saguache County resident Doug Bishop has been chosen as its new Executive Director.

Doug is a native of Colorado and has lived in the northern San Luis Valley for over 40 years since moving to Major Creek, just south of Valley View Hot Springs, in 1973. He first visited Valley View that same year, even before OLT’s founders discovered it!  In 1980, he moved to his current home on ten acres that were originally part of the homestead that became Valley View Hot Springs, which is now owned and operated by OLT.

Doug has worked off and on at the hot springs since 1975, both in a hands-on and decision-making capacity. Over the decades he has contributed to many construction, remodeling, and infrastructure projects at OLT. Besides founders Neil and Terry Seitz, no one is more familiar with the history of OLT than Doug.  In addition to his extensive “on the ground” experience, Doug has also helped guide the organization by serving on the Board of Directors since OLT’s inception in 2001, making him its longest serving board member. He recently served as the board treasurer and has his finger on the pulse of the organization’s finances.

Apart from his work at OLT, Doug has worked extensively in both tourism and education, two of the key components of the OLT mission. Doug worked for years at Monarch Ski Area where he developed many planning, budgeting, and management skills working with both guests and employees and eventually managing the Monarch Children’s Center. Doug left Monarch to pursue a career in public education and is currently teaching at Mountain Valley School in Saguache where he developed many close relationships with other educators, parents, and students. Doug graduated Summa Cum Laude with a degree in Elementary Education from Adams State University in Alamosa with a nearly 4.0 average, and has completed all course work toward a Master's Degree in Special Education. He is a true Valley “local” and a respected member of the community, which is an important asset when dealing with ranchers, neighbors, and landowners here in the San Luis Valley.

On the home front, Doug has exemplified and embraced OLT’s strong conservation and environmental values. He has built his own homes with a close eye on recycling, conserving, and being creative with scarce resources.  This has given him a realistic, grounded, and fiscally conservative outlook over the years, qualities that will serve him well as OLT’s Executive Director.

The OLT board also sincerely thanks Facilities Manager Mark Jacobi for the fine job he has done as Interim Executive Director during the last six months. Mark has filled the role with grace, humor, and integrity, and he has worked well with both the board and staff.

Last modified on Sunday, 11 May 2014 08:36
Tweet
More in this category: « 2014 Membership Dinner and WWTP Fundraiser OLT Needs Board Members »
back to top