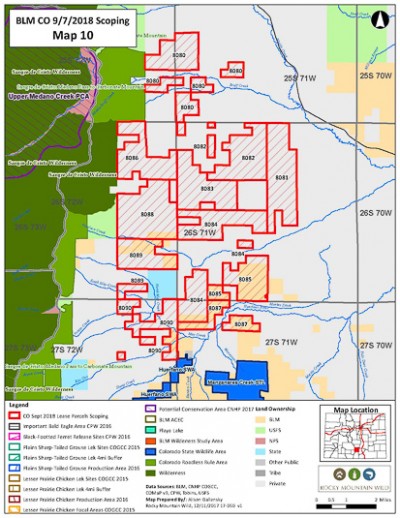 As you may or may not know, there is a proposed lease for oil and gas development near the Great National Sand Dunes Park and other important conservation areas in the Sangre De Cristo Mountains. Please read the attached letter and see attached maps of the area involved. Public comments are needed by Friday, April 6th, 2018.

Please also send a copy of your letter to SLVEC at:

It has come to our attention that the Bureau of Land Management (BLM), through the Royal Gorge Field office, are now in the process of taking public comment, for the following nominated parcels regarding a potential oil and gas lease sale:

8085, 8086, 8087, 8088, 8089, 8090). These nominated parcels are located on the eastern side of the Sangre de Cristo mountain range, within the Wet Mountain Valley. Some of these parcels are bordering designated Wilderness and are also located within a few miles of the Great Sand Dunes National Park and Preserve boundaries.

Address your letter to:

The BLM is currently in the midst of a Thirty-day public review and comment period for a potential lease sale and a draft Environmental Assessment (EA) will be published on Thursday, March 22nd. Your comments will be analyzed and incorporated into the final environmental analysis “as appropriate.” Final announcement of sale is scheduled to take place Friday, July 20th, followed by another 10-day protest period.

Parcel 8086 is directly adjacent to the Sangre de Cristo Wilderness.  All of the parcels in Huerfano County (parcels 8080, 8081, 8082, 8083, 8084, 8085, 8086, 8087, 8088, 8089, 8089, 8090) are within 6 ½ or fewer miles of the Sangre de Cristo Wilderness. In addition, parcel 8080 is directly adjacent to the Colorado Roadless Rule upper-tier roadless area named Sangre de Cristo: Medano Pass to Carbonate Mountain. There is concern that leasing parcels adjacent to or near these areas could impact air and water quality within these areas and impact the naturalness and opportunities for solitude in these areas or have other impacts.

Great Sand Dunes National Park and Preserve is highly valued for its near-pristine qualities of nighttime darkness, and its natural soundscapes. These two characteristics can especially be experienced in the backcountry of the preserve, the portion of the park which is closest to the proposed parcels of concern in Huerfano County.

The NPS’ Natural Sounds Program has conducted acoustic monitoring in the park and found that Great Sand Dunes to have one of the lowest levels of measurable ambient noise in the national park system. This natural quiet was partly the basis for a 2009 U.S. District Court decision preventing oil and gas drilling in the Baca Wildlife Preserve managed by U.S. Fish and Wildlife Service, which is adjacent to the park on the west side of the dune fields. (See: Turina, “Protecting the Acoustic Conditions at Great Sand Dunes National Park and Preserve,” NPS Park Science, 2015, available online: https://www.nature.nps.gov/ParkScience/index.cfm?ArticleID=379)

Since this project is occurring near the proposed lease area it is important to bring this to your attention.

Parcels 8089, 8081, 8082, 8083, 8084, 8086 are all within the Wolf Springs Ranch (8084 also includes a portion of BLM lands just south of the ranch) which is part of the Colorado Parks and Wildlife Ranching for Wildlife program. The Public Hunter Management / Ranch Rules indicate that the top soil in the ranch is extremely fragile. BLM analysis should analyze possible impacts to top soil.

Link to the timeline of BLM decision making and public process

Last modified on Monday, 26 March 2018 08:18
Tweet
Download attachments:
More in this category: « Get your Tickets Now - Ranch Celebration Event October 1, 2016 Everson Ranch: Past, Present, and Future »
back to top