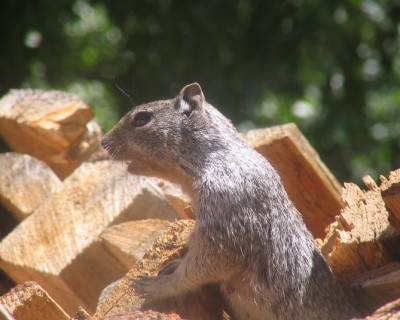 This summer saw spikes in the populations of a variety of wildlife. Numbers of individuals for a variety of species are characterized by years of low population and other years when the populations soar. Mice, rabbits, and squirrels are prey for coyotes, hawks, and owls. When the population of the species that are lower on the food chain spike, a little while later there is a spike in populations of predators. We are already seeing and hearing more coyotes. This past weekend some people saw a snowy owl catch a squirrel near the heated pools.

There have been a lot of squirrels. They are cute and they are everywhere. We are extra aware of keeping doors closed and trying to keep the outdoor animals outdoors. With the arrival of cooler temperatures, the mice have been moving into the cabins and indoor spaces. We are setting traps and patching holes. Mice can get in a very small opening and they are a fact of life in the country. We are not putting out poison. Because mice are low on the food chain, poisoning mice poisons the entire hierarchy.

What can you do? Keep your food closed up in mice resistant containers, keep doors closed, and let us know if you see a "full" trap. The little creatures are more numerous this year than they have been for quite some time. We expect to see them try to enter the indoor spaces as they seek warmth and food. Be prepared, be patient. We are making efforts to minimize the impact of the high population of "varmints."

Last modified on Friday, 13 November 2020 12:26
Tweet
More in this category: « Bon Voyage Dear Friend Shrink Your Bubble »
back to top