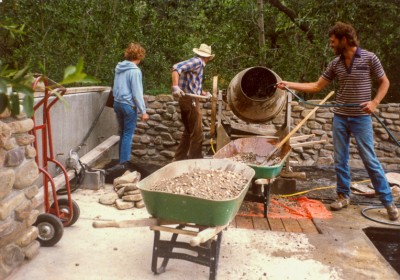 Neil and others, rebuilding the Swimming Pool, circa 1980 Doug Bishop

Neil Seitz died November 17, 2021 in his home. For those of us who have been around for a while, Neil was well known and recognized for many remarkable achievements. The hot springs was once owned and operated by the Everson family and, in the early years of Neil's stewardship, he spent many days helping Roy Everson at the Everson Ranch in addition to overseeing daily activity at the hot springs. Neil was a hot springs caretaker at first and then worked out a lease arrangement. Neil and Terry bought the hot springs in 1979 from Faye Everson after Roy died in 1978. The Seitzes rebuilt the swimming pool, integrated geothermal space heating, fixed up the old cabins, built the hydroelectric power plant, built the bathrooms, and navigated a balance between fixing up the hot springs and retaining a rustic and historic atmosphere.

How does one protect and shelter the natural wealth of this place? Neil and Terry answered the question by founding Orient Land Trust in 2001. Through the years before the land trust they had worked toward environmentally sound practices. As the goals of the land trust were articulated, past innovations and forward looking ideas became part of the ideals. Miles from the electrical grid, alternative energy ideals led to hydroelectricity. Valuing natural resources extended to protecting water, wildlife, and flora. Preserving the history of the Orient Mine, the agricultural heritage of the area as well as promoting sustainable land use were recognized and specifically documented. Trying to save some of the vistas and open land that once characterized this part of the world was recognized as a worthwhile effort. The oasis of the hot springs had for many years offered opportunities for people to reveal their bodies and, in so doing, reveal their undisguised inner selves. This too was woven into the purposes of Orient Land Trust. Part of the donation of the hot springs to the land trust includes a deed restriction that guarantees that clothing remains merely an option. Neil and Terry, conservationists with regard for nature and history, created the land trust in alignment with these values. Their life's work was donated to protect the place treasured by so many. The work reaches beyond the boundaries of OLT's properties into the entire northern San Luis Valley.

For many years, Neil and Terry lived in a small log cabin built in the 1920s. In the late 1980s, the Seitz home was built. There, Neil and Terry raised their children and used the precious large space for extended family get-togethers, board meetings, and gatherings for many occasions. Prior to his death, Neil had been ill for several years yet was able to live out his life at his Valley View Hot Springs home. We are grateful for his inspiring vision and many gifts. Our admiration, respect, and gratitude are extended with our sincere condolences to Terry and the family.