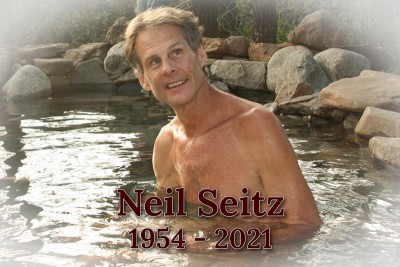 Neil Seitz, age 67, achieved freedom from a long illness on November 17, 2021. He passed away peacefully with his wife by his side at his home at Valley View Hot Springs, Moffat, CO. Neil was born on August 12th, 1954 in Winona, Minnesota, to Doris May (Hoffman) Seitz and Ferdinand aka Vernon Seitz both of whom pre-deceased him. He is survived by his wife of more than 40 years Terry (McLaughlin) Seitz, his brother Donn Seitz (Revae) of Winona, his three sisters Suzanne Arnold (Richard) of Baja Mexico, Keta McCarthy (Brian) of Winnetka, IL, Amy Cordry (Val) of Winona, and his three children James Seitz (Deanna) of Parachute, CO, Michael Seitz of Poncha Springs, and Lucia Seitz Kaichen (Lucas) of Fairbanks, AK, as well as his 5 grandchildren – Alexis - 16, Tatum - 13, Gauge - 13, Elijah - 11 and Ivy - 4. Neil was a beloved member of his wife’s family and survivors include his mother-in-law Hilda (Scott) McLaughlin – 98, and his sisters-in-law Karen McLaughlin (Mark Schubin) of New York City and Elinor Laurie (Richard) of Moffat.

Neil was working toward an engineering degree at CU Boulder when he was told about a place called Valley View Hot Springs and his life’s path was permanently altered. Upon visiting the hot springs in 1974 he decided to take a semester off from college to caretake the hot springs for then owners Roy and Faye Everson. That semester off lasted for the rest of his life, and his vision for the hot springs and surrounding area guided him and proved a lasting passion. A year after he moved to Valley View, Terry joined him and together they steered the popular and unique resort for nearly 30 years, having purchased it from the Everson family in 1979. In 2001 the Seitzes realized that there needed to be a way to preserve the hot springs for generations to come, beyond their lifetimes. They created Orient Land Trust to do this and in 2010 donated the property to the non-profit. Not long after donating the hot springs, Neil was diagnosed with Posterior Cortical Atrophy, a rare form of early onset dementia.

Neil was very active in the communities of northern Saguache County for many years. He enjoyed his participation in the SC Search & Rescue in the late 70’s and early 80’s. He served for many years on the SC Planning Commission. But one of his great, and much appreciated, endeavors was the annual fireworks show at Valley View on the 4th of July which he provided for nearly a quarter century until his disease and other factors required him to give it up.

Neil was extremely intelligent, a true renaissance man, patient, dedicated and a wonderful father. He held life-long beliefs about the necessity of reducing the planet’s population, and this led him and Terry to adopt their three children. It also inspired him to develop an off-grid electric system for Valley View utilizing hydroelectric power, creating a “green” resort before it was in vogue. Neil was also devoted to the freedom of clothing-optional recreation.

Neil was a shining star of inspiration for many, many people who worked with him, visited the hot springs, or were lucky enough to become his friend. His vision enabled many to find peace, joy, community, purpose, acceptance and love. Neil will be hugely missed but never forgotten. It is hoped that a memorial celebration of his life will be held at Valley View in the summer of 2022. Gifts in memory of Neil may be made to Orient Land Trust.