Everson Ranch: Past, Present, and Future 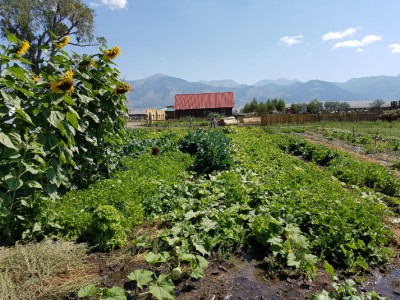 The ranch is an integral part of the Orient Land Trust. The Valley View property was once part of the ranch. Some of the people who have been coming to the hot springs since the early 1970s remember sharing their campsite with cattle that roamed through the campground. The Eversons, Roy and Faye, took on Neil as a caretaker to help them manage the hot springs as the popularity soared. Neil and Terry eventually leased the hot springs and, after Roy died, they bought it from Faye. Roy liked that Neil had a truck and could help haul in firewood for the campfires. Roy also gave Neil permission to rebuild the crumbling swimming pool. The water from the springs has been used to irrigate the agricultural endeavors at the ranch for over a hundred and fifty years.

The ranch is as much an attraction as the hikes to the bat cave, watching sunsets from the top pools and the clothing-optional dance party on Members' Appreciation Weekend. Five years of OLT effort are now bearing fruit. Beef from the ranch's cattle and eggs from the chickens are available in the hot springs visitors' center. Vegetables and greens from the ranch garden are available, in season, at the Welcome Center. Fields that were desolate from years of dis-use are green again. We've hosted regular breakfasts and barbecues at the ranch, and that's just the beginning.

The history of this ranch has always been tied with these historic hot springs, and the OLT is working to ensure that it always remains so.

This is the story of the Everson Ranch.

John Everson loved the hot springs as much as anyone who is here today. Maybe more so.

An accomplished carpenter and builder, his family had married into the family of German immigrants who homesteaded here. He built the Oak House, most of the cabins, the original swimming pool and main pond. The Orient Mine – you know it as "the bat cave" – was in its heyday, and John did a healthy business selling goods to the miners, who occupied the cabins when the lodging at the mine was full, as well as collecting entrance fees to tourists who came to "take the waters."

He made up for his small stature with a pair of pearl-handled pistols he carried on regular runs to the bank in Saguache. When he told visitors their swimming time was up, they listened.

When the mine closed in the 1930s, he was left with little business and lived out his life at Valley View, dying in 1952. His grandson Roy Everson returned from World War II to run the ranch and hot springs, which by this time were rarely visited. The buildings fell into disrepair and pieces of the ranch were sold until only 1,120 acres remained. Roy Everson came home to run the ranch after several years as a cook in WWII. During this time only occasional groups would use Valley View. The large ranch suffered hard times and parcels were sold. The hot springs property may have suffered the same fate had Neil Seitz not arrived at the ranch for a summer job in 1974. He never left. Terry joined him in 1975 and they bought Valley View from Roy's wife, Faye, in 1979 after Roy Everson's death.

For more than 20 years, Neil and Terry Seitz worked to restore and upgrade Valley View into the gem you know today. But the ranch suffered a different fate, falling out of the Everson family and being bought and sold several times. Ranching and farming ceased; the buildings disintegrated.

When Neil and Terry retired and created the Orient Land Trust to run Valley View, the nonprofit's first capital campaign was to save the ranch from development. It was a steep price, $850,000 for 760 acres, due to the development potential, but by 2010 the OLT had secured the ranch and several more parcels.

Ever wondered where the water goes after you're done soaking in it?

It flows to a reservoir on the Everson Ranch, after first powering Valley View's hydroelectric plant and running 2 miles across the valley floor. It's still warmish, though not soaking temperatures and provides excellent habitat for the threatened Rio Grande chub and Rio Grande sucker. The Rio Grande chub were present in the hot spring streambed and the Rio Grande sucker were added in partnership with a project conducted by OLT and the Natural Resources Conservation Service. The water flows through a meandering creek that was constructed to increase and enhance the natural habitat.

Ranch manager Mike O'Donal has done plenty of this work over the past five years. Along with other OLT staff and volunteers, he has turned arid land into green fields, growing hay, grass and alfalfa, to feed the livestock. There are small fields planted in nourishing cover crops, providing food for the pigs and enriching the soil. Large fields have been divided into smaller fields and the ditches have been raked of the tumbleweeds that choked the flow and gated pipe provides an efficient way to distribute the water collecting in the reservoir.

"The whole idea is to rehabilitate the land, to bring it back from the dead," says Mike.

Yes, livestock are back too, Scottish long-haired cattle, owned by Arrowpoint Cattle Company. Owner Nancy Roberts pays the rent in organic, grass-finished beef, sold at the Valley View Welcome Center and served at events at the Everson Ranch. As of the summer of 2017, there is a small herd of goats as well as a population of Black Hogs. A garden is producing lots of vegetables and garden produce. Chickens provide the eggs available at the visitors' center. There are several hives of bees from which honey is expected in 2018.

There's a finished combination bathhouse and kitchen near the garden that is connected to a methane digester, turning waste products into fuel that can heat water or provide flame for cooking. The straw bale building is built with the capability of being heated by a solar collector.

The ranch still shows signs of years of degradation, brown fields and crumbling buildings. But you should've seen it before.

Says Mike, "We've got a lot of years left on cleaning the place up and getting it looking good but we've come a long ways."

The OLT began hosting meals for guests and special events at the ranch in the summer of 2016. This sprout is being nurtured and with your support more can be done

The bathhouse is a place where volunteers and guests can shower and cook meals. Visitors have been able to camp, either in tents or vehicles, at the ranch as they participated in events that were held at the ranch in the summer of 2017.

Whatever happens, expect the disturbances to the ranch to be minor. That's because The Nature Conservancy holds a conservation easement over much of it, ensuring the land remains undeveloped. Along with the livestock and the fish there is other wildlife. The birds and raptors have discovered the undisturbed open space and riparian corridor. Burrowing owls take up residence in prairie dog towns. Pronghorn antelope roam free over the pastures and scrubland.

Valley View visitors are welcome to visit the ranch on their own or on a guided tour. There are fledgling plans for a bicycle path between Valley View and the ranch.

It's about enhancing the experience for Valley View visitors, as well as preserving the land.

"It's going to give them another look at how the land is being taken care of. We're a land trust. We're trying to have the land trust us and take care of it," says Mike. "Most people come from the cities when they come here. People are getting away from the country, with the technology, looking at their little cameras and phones all the time."

"It's just something that's going by the boards that people need to be part of."