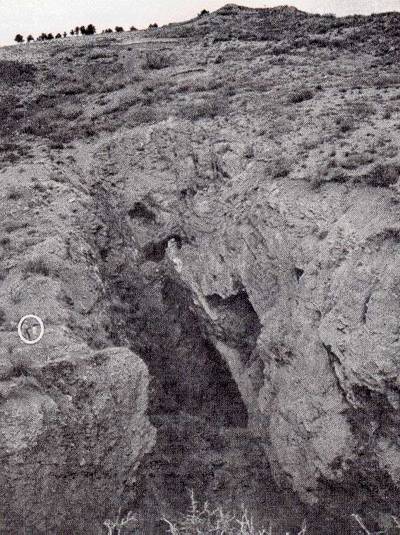 The Orient Mine, active from 1880 through 1932, was the largest producer of iron ore in Colorado, having produced about two million tons of limonite. It is believed that the name Orient came from the Old French word meaning east (rising sun), since the mine is located on the eastern side of the San Luis Valley. (There is no evidence of Chinese or other Asian miners working in the mine.) The Orient Mine had two associated town sites - one in the upper area in the early years and the lower town site which was active in the early 1900's. Today nothing remains of the towns except stories and a few foundations.

At its peak, the town of Orient had a population of more than 400, supporting a library, barber shop, school, 2 restaurants, a boarding house for 300, a saloon, a milling company and other small businesses including a supplier of work clothing.

Today, the Orient Mine is significant because for the last forty years or so it has been home to nearly 250,000 migratory bats. Bats were first documented at the Orient Mine in 1967 and have played a vital role in the chemical- and pesticide-free agriculture of the Valley. The Orient Mine is a designated Colorado Natural Area and Colorado Division of Wildlife Watchable Wildlife site.

Access to the interior of the Orient mine is currently prohibited due to White Nose Syndrome, a fungus that severely disrupts the sleeping pattern of hibernating bats to the point of colony collapse. White Nose Syndrome has not been found in Orient Mine as it doesn't, so far, affect migratory bats, but the Orient Mine is also home to five or six populations of hibernating bats. OLT's voluntary closure of the mine is part of similar closures throughout the American West to prevent the spread of this disease.

The mine is also a glimpse into the geologic history of the Sangre de Cristo Mountains and the San Luis Valley, a glimpse into a past that begins over 1 billion years ago. Its more recent history as an iron mine, starting in the late 1800s, has connections to Colorado mining history.