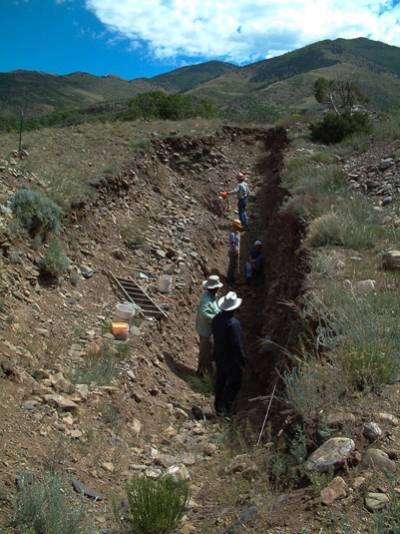 HOT SPRINGS GEOLOGY 101: Where the Water Comes From

Valley View’s water rises along the Sangre de Cristo Fault (SCFZ), a planar geologic fracture across which the Sangre de Cristo range has been uplifted as much as 16,000 feet relative to the San Luis Valley. The SCFZ is Colorado’s most active fault, having displaced moraine deposits of the latest Pleistocene ice age as much as 6 meters vertically in 2 large prehistoric earthquakes of about magnitude 7 (but that’s another story...).

Bedrock in the fault zone has been crushed and rotated by this slippage, creating a near-vertical zone of interconnected void spaces that water can flow through. The fault zone is generally more permeable than the adjacent wall rocks, so it intercepts and diverts lateral deep groundwater flow from the mountains to the valley. This warm water then rises up the fault zone and emerges at Valley View. The springs are probably localized at this spot because an east-west fault in the mountains intersects the north-south Sangre de Cristo Fault, creating a small but severely crushed intersection zone.

The spring flow is made of 2 water components: (1) deeper, warmer groundwater that intersected the fault zone at depth, got heated, and then rose up in the fault zone (geothermal water), and (2) shallow, cooler water from infiltrating rain and snowmelt (meteoric water). The flow volume of deep geothermal water is essentially constant through the year, but an influx of cooler meteoric water occurs  from spring snowmelt in March to May of each year. At that time of year, the springs flow with the least volume but the entire flow is cooled by the larger component of cool meteoric water.  Possibly the cooler water reduces the ability of the deeper, warmer water to rise. This effect is most pronounced at the top springs, which catches the most mountain runoff, and is less at the lower springs. Conversely, in late summer through mid-winter there is essentially no meteoric infiltration on the mountain, so the spring flow is increased in volume, but it’s hotter because it’s almost totally composed of deep circulating water.  This year, the drought has caused water flow to drop to about  65% of the long-term average with no return to normal flow so far. However there has been no measurement of temperature above the normal 99 degrees at the top springs.  Other dry spells have produced top springs temperatures of over 106 degrees. Clearly, further research is needed. Some poor geologist may have to do this, by soaking in all the pools repeatedly. Yes, it's a tough job........