OLT’s Hydroelectric is Under Control

Visitors to the OLT’s Valley View Hot Springs may not realize that the water that warms them in the Apple Tree Pools also heats cabins via radiant underfloor piping, and then is used to generate electricity, which in turn heats the pools and provides power to the campus. This remarkable system is one of the unique things about Valley View, and an integral part of the facility’s “recycle, reuse, reduce” commitment.

OLT member Tom Bowes visited in October 2013 and took a tour of the hydroelectric generating station, hosted by OLT’s Master Electrician, Scott Wilfong. Scott demonstrated the means of controlling the water flow rate to the turbine, via the hydraulically operated “spear valve” powered by an electric motor. He explained that at one time the valve had been remotely controlled by means of a telephone line, connected to a control box that had been provided as part of the original hydroelectric equipment. Unfortunately, a lightning strike had blown out the controls and damaged the phone line a number of years ago, relegating the system to a rather crude method of manual control by means of two wires touched to an old car battery to operate the valve. When touched to the battery one way the valve would open, the other way and it would close. 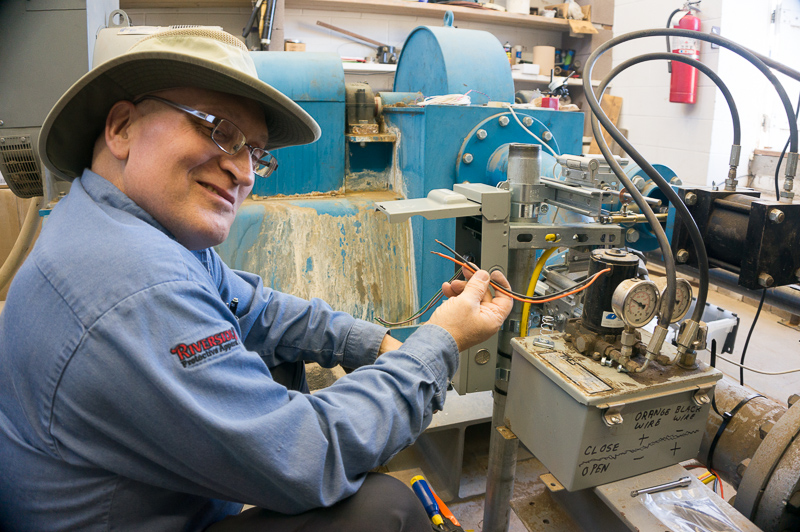 This method of control was inconvenient to say the least, since one person had to drive the 2.2 miles to the hydro station to manipulate the valve, while another stood within sight of the collector box at the top of the penstock pipe. Two-way radios were used to communicate back and forth to increase or decrease the water flow rate based on the amount of water flowing over the weir at the collector box. This meant that at least twice a week, before and after pool cleaning, somebody had to go to the hydro plant to make adjustments. It also meant that at times excess water flowed over the weir and was lost, instead of being used to generate electricity, which was problematic in the winter when every kilowatt is needed to heat the Apple Tree Pools. Added to this, there was no effective way to monitor the operation of the system remotely in order to respond to a problem before the hydro system automatically shut down.

After the hydro tour, Tom, who is an electrician/instrumentation technician from Warren, Michigan, remarked that he might be able to come up with a new remote control system, and would donate it to the OLT. He began the design while recovering from knee surgery last December. Using a few new items, some repurposed items from eBay, and many “junk box” parts left over from other projects, he designed and built a new control system for the hydro plant. A recycled industrial pressure transmitter that had been cast off from a petroleum refinery found redemption as the primary sensor for this renewable energy project. Old pipe flanges from a gas-fired boiler were made into support stands for the spear valve position sensor and for the control box. It was rumored in Detroit that Tom could be heard chanting, “recycle, repurpose and re-use”, as he worked through the cold winter evenings building the system. The new design would feature a wireless data link between the OLT visitor center and the hydro plant, remote control via the internet, and automatic notifications and alarms to key facilities personnel in case of a problem. 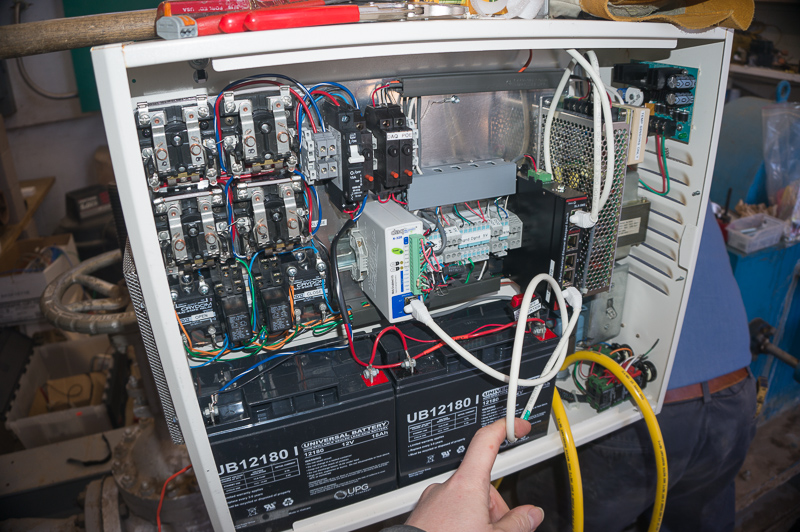 In late January enough of the control system was assembled and tested that the OLT team of Interim Director Mark Jacobi, Information Manager Doug Bates, and Electrician Scott Wilfong were able to watch a brief YouTube video that Tom had made showing its design and operation. They were also able to remotely control the system, while it was located near Detroit. The team worked with Tom via email and phone to address areas of concern and to refine the design as he worked on things in Michigan. In late March, Tom and his girlfriend, Linda Diane Feldt, loaded up his Chevy Volt with what appeared to be “everything but the kitchen sink” and drove to Valley View for a busy week of installation. They were fortunate to witness the great migration of Sandhill Cranes near Kearney, Nebraska on their way.

Work on the installation began on Monday, March 24th, with Tom, Scott, and Doug tackling the various things that had to be done at the hydro station, with assistance from Mark Jacobi. Doug and Linda Diane documented the event with many photos and videos. After a couple of 10-12 hour work days, at lunch time on Wednesday, March 26th, a trial was conducted with the wireless transmitter for the visitor center temporarily pointing out the window toward the hydro plant. Success! The new system provided wireless control and monitoring of the hydro plant two miles away. Later that afternoon Mark and Doug mounted the transmitter in its final position near the peak of the visitor center roof, the final step in a months-long project. 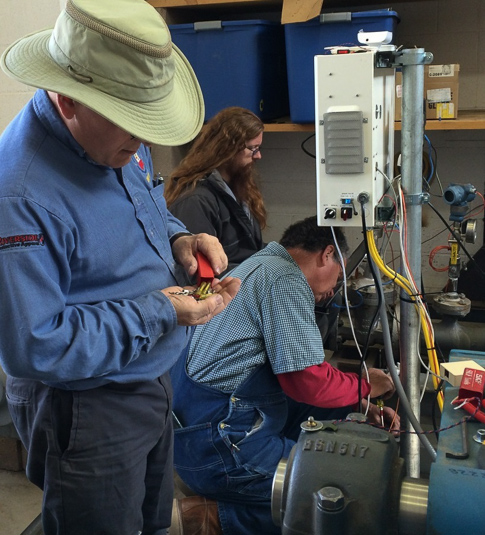 The new control and monitoring system has already prevented a couple of shutdowns due to algae and weed obstructions of the water at the collector box, saving the OLT on expensive diesel fuel to run the backup generator when the hydro system goes down. Bearing, air, and water temperatures are now measured and logged, along with relative water flow rates. Head pressure and frequency alarms for the hydro plant, delivered via email and text messages, now help to alert OLT personnel if there is a problem. In the longer term, logging the water flow and temperature data will help the OLT to develop energy management strategies and will help to provide more comfortable soaking for visitors during the winter and spring months.

The OLT thanks Tom Bowes and Linda Diane Feldt for their work and generous donation.