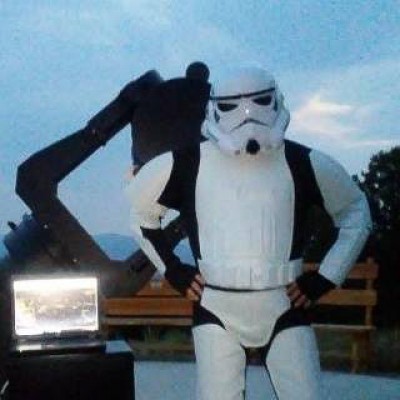 We would like to congratulate Mark Cunningham on receiving the honorable title of NASA Solar System Ambassador! Mark has been the lead astronomer at OLT since 2014 and was an integral part of the installation of our new telescope and training of volunteers to operate it.

Mark received his first telescope at the age of 12, which began his lifelong love of astronomy. He is an Astro-photographer with over 20 years of experience, has had his photos, and articles published in Astronomy Magazine. His photos have won several awards, including Best Solar Eclipse Photo of 1991, and have been published on SpaceWeather.com where they went worldwide, presented on the London evening news and published in the England Royal Geophysical Journal. Mark is a featured artist in several art galleries, including Paragon Art Gallery in Crested Butte, Colorado. He is a dedicated volunteer doing research work for several organizations. Mark photographed, documented nightly observations for the International Halley Comet Watch, his data being published by NASA. He was the first astronomer who photographed the tail forming on Halley's Comet and has done extensive comet research for CU in Boulder, studying Hale Bopp, Ulysses, and Hyakutake. Mark was the first astro-photographer to discover that the nucleus of comet Hale Bopp had split into two pieces and was able to capture the photograph. Awarded time on Denver Universities Meyer-Womble Telescope with Dr. Roger Stensel, he spent a week on top of Mt. Evans doing an independent study on colliding galaxies. Mark has worked with Galaxy Zoo online doing a galaxy classification project and super nova search.

The Solar System Ambassadors program is a public engagement effort that works with motivated volunteers across the nation to communicate the science and excitement of NASA's space exploration missions and discoveries to the people in their communities. It is a public outreach program of the Jet Propulsion Laboratory. More than 700 volunteers in all 50 states as well as Washington DC, Puerto Rico, the US Virgin Islands, and Guam share information about exploration missions and recent discoveries to their local communities. The program is an extension of the original Galileo Ambassadors program created to share information about the Galileo mission.

Mark joined OLT's volunteer program in 2007 coming from Missouri with his own telescope and offering astronomy tours in the summer. He moved to Colorado five years ago and has been a dedicated volunteer since that time, offering his expertise year round. He was instrumental in OLT building the current astronomy pad, building and acquiring the new scope. Mark has been an integral part of our kid's science camp, giving tours to youth and sparking their interest in science. In 2018, we offered 139 astronomy tours attended by 2,693 kids, adults and seniors, our highest attended educational program to date! Mark worked with other volunteers and astronomy enthusiasts, training them to operate the telescope adding to our pool of qualified tour guides. Our goal is to have the telescope available with a guide every night, spring through fall. Every year we move closer to that becoming a reality.

Orient Land Trust attracts great volunteers! We are fortunate to have Mark Cunningham leading our program and sharing his expertise and experiences with our guests. We are proud to acknowledge his accomplishments and congratulate him on becoming a NASA Solar System Ambassador. Thank you Mark for all that you have given as a volunteer at Orient Land Trust, we are so grateful to have you leading our astronomy program!

Last modified on Wednesday, 13 February 2019 14:39
Tweet
More in this category: « Next Generation of Goats at the Ranch Nantucket Pumpkins »
back to top