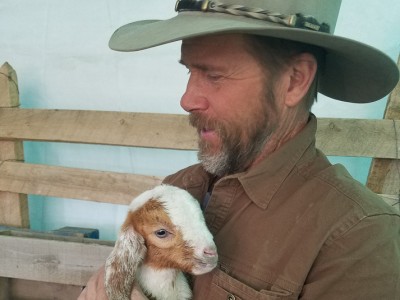 How much can one man accomplish in 8 years? If there is a limit, nobody told Mike O'Donal. Since being hired by the Orient Land Trust as the manager of Everson Ranch, Mike's list of accomplishments is practically never-ending. But nothing gold can stay. After this summer Mike will be hanging up his boots and retiring from Everson Ranch. When asked what Mike has done on the ranch since being hired, Doug Bishop, executive director of the Orient Land Trust, just laughs and says, "Practically everything. Mike has been a workhorse from day one," Doug says. He goes on to list some of Mike's many achievements, including everything from building a bathhouse/kitchen, to cleaning up countless deadwood trees and rusty nails. From bringing in the animals and expanding the herds, to working to protect the endangered fish species in the meanders. From fixing up old buildings to helping with the science camps. From building countless yards of fencing to converting a shipping container into a workshop. Installing a methane digester to putting up a front porch. Creating an irrigation system to planting and cutting hay for winter feed. The list goes on and on, and on, and on; to the point where the only question left to ask is, "Who is this guy!?" The answer to that question has so many answers. Mike is a loving husband and proud son. A teacher and mentor who has trained countless volunteers, kids, and staff on the how-tos of running a ranch. A builder who has constructed over a dozen homes as well as the Apple Tree ponds at Valley View Hot Springs. A person who shows up, day after day, and lives his passion. "I have received so many compliments about Mike," says Rosie Rosenberg, Visitor's Service Manager. "Children have been changed forever. Hearts and eyes have been opened by Mike." Rosie tells of visitors who were delighted after being treated to one of Mike's patented hour-long tours of the ranch that feels more like a safari than a simple tour. "He is often a man of few words, but also someone who has always been enthusiastic to share his knowledge and passion with others," Rosie says. Mike's impact stretches beyond the ranch and all the way up to the hot springs. In 2013, it was Mike who designed and built the Apple Tree Ponds, which opened up winter-time soaking at Valley View and helped utilize the extra power that was being made by the hyrdo-electric plant. He was also the driving force in bringing meat, eggs and produce up to the hot springs for guests to purchase and enjoy. Mike's impact goes beyond the physical state of things and into the entire ethos of the ranch and the intentional connection between man and the land. Mike and his wife Cherrye have been a staple at the ranch for as long as visitors have been coming down. They were always the first to welcome a new-comer, and the first to proudly show the holistic land management strategies being implemented and the importance behind them. They've started a weekend market to showcase the fresh produce and meat, helped hire and train an ever-growing staff, and all the while focused on ensuring that the staff feels like a family. In his last summer, Mike is spending his time training the new ranch manager, Pete Wells, to ensure a smooth hand-off. He is also building a commercial food processing kitchen with an attached deck, a project that will open up the ranch's ability to process and produce, honey, and value added foods as well as host more workshops and meetings. When asked about the kind of man Mike is, Rosie tells a story about the winter of 2015. "There was a blizzard," Rosie says. "Complete white-out. And I was getting phone call after phone call with guests getting stuck on the road coming up to the hot springs." Rosie called the highway department, no plows were available. Rosie called the police, they were all busy. A facilities manager got out the plow and went down to the road, got stuck. Another facilities staff person went to try, got stuck. The police finally came, the cruiser got stuck. All the while, the storm raged on and the temperatures continued to drop. Four hours in, and no solution was found. Then Mike came into the Welcome Center and, after Rosie explained the situation, Mike said, "Let me see what I can do." Mike proceeded to take the back roads to the ranch, fire up the tractor, get out the backhoe and plow the entirety of Road GG, pull out everyone who was stuck, then went to highway and proceeded to pull out the sheriff and anyone else who needed help. Rosie finishes the story with her eyes welling up just a little and says what everyone else is thinking this summer. "I'm gonna miss him."